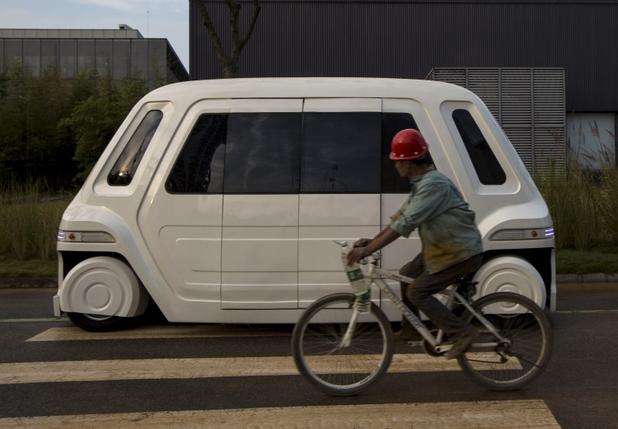 Automakers, not technology companies, are in the driver’s seat in developing self-driving, “autonomous” cars, and Japan’s Toyota Motor Corp (7203.T) is best positioned to lead the way, according to a new report on patents for the fast-evolving technology.

The report, by the Intellectual Property and Science division of Thomson Reuters (TRI.TO), is based on a detailed analysis of patent filings by automakers and tech companies for autonomous-car technology. (tmsnrt.rs/1OxPQ3P)

The findings illuminate the challenges for both established automakers and Silicon Valley companies as they compete to profit from moving people around in a world that is increasingly congested and concerned about carbon emissions.

The global auto industry is in the midst of three simultaneous, and interconnected, technology revolutions. The first is the quest for cleaner alternatives to internal-combustion engines. The second involves connectivity and linking cars to information or data services. Lastly, the autonomy revolution is the effort to develop self-driving cars that could enable services in which electric cars connected to the Web can be summoned to provide rides on demand.

“Automakers aren’t as good as technology companies in tooting their own horns,” Tony Trippe, principal author of the report, told Reuters in an interview. “But when you look at the patent data, the automakers are all over this.”

The report from the Thomson Reuters unit comes as auto and technology industry executives are gathering at the annual Consumer Electronics Show in Las Vegas, where alliances to advance autonomous driving and connected vehicles will be central topics.

GM said on Monday it will invest $500 million in Lyft Inc as it forges a Detroit-Silicon Valley partnership with the ride-sharing service to develop an on-demand network of self-driving cars.

Toyota, the Thomson Reuters report found, has more than 1,400 patents on autonomous-driving devices, more than twice as many as any other company. One recent Toyota patent application, for example, is for software that avoids a car’s self-driving system being switched off, and thus defaulting to “manual mode” in which the driver controls the car, unless the driver intends to turn off the system.

The raw number of patents does not necessarily equate to leadership in developing self-driving cars, Trippe said. Non-U.S. companies tend to be more aggressive in filing patent applications than American companies. The quality of patents is also important, since not all are created equal.

Another potential limitation of the report is the 18-month lag time between patent filings and when the filings are published for the public.

In reality, driverless-car development will require alliances between automakers and technology companies, even though both sides will try to gain the upper hand in partnerships.

A Toyota spokesman said the automaker views a fully self-driving car as a long term goal, but one that must wait for autonomous driving systems that never make a mistake. In the meantime, Toyota is accelerating efforts to equip cars with automatic braking and other safety systems that can help avoid crashes.

Most experts say fully self-driving vehicles are unlikely to be roaming roads in large numbers for many years yet. Google has been testing self-driving cars since 2009, though, and automakers such as Daimler (DAIGn.DE), BMW (BMWG.DE) and Volkswagen AG’s (VOWG_p.DE) Audi unit have revealed cars that can travel long distances without human intervention.

Trippe said Apple and Tesla would make logical partners in autonomous cars because they have complementary, not duplicative patents. Tesla’s strength is propulsion technology, notably batteries, while Apple’s is in electronic navigation and communication systems.

As the race to develop self-driving cars heats up, automakers are also introducing more “semi-autonomous” driving systems that handle tedious or tricky situations. Audi, for instance, is expected to use the CES show to outline progress on a system that allows cars to pilot themselves in traffic jams at low speeds.

Top 5 – Technology That Has Changed The World